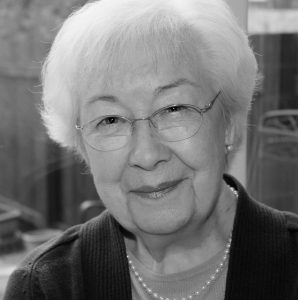 I once attended a talk given by Eileen Malone and her first words were I want to tell you about the picture on the wall that has become real. Whose picture? The picture that hangs in every Mercy Convent of the image of Venerable Catherine sitting at her desk in Baggot Street. Eileen continued to recall that in her earlier years as a Sister of Mercy there was very little devotion to the Foundress of the Order. However, when she left the Congregation and eventually married a widower with four children to whom she was devoted and was then approached to become a Mercy Associate in the 1990s she really became familiar with the life of Catherine and saw her as a friend and no longer a picture on a wall.

It was at the first meeting of the National Commission set up on 28th Oct 2000 where Associates and Sisters from the Federation, Institute and Union came together to see how Venerable Catherine McAuley could be made more well known, that I met Eileen. We were asked to get into pairs and tell our stories of Mercy, I was paired with Eileen, and I am convinced that it was Catherine that brought us together. We shared on how Catherine had touched our lives. That first meeting led to more meetings where it was decided that it should be an Associate who would Chair the Commission, not a Sister. Yes, Eileen was chosen to be the Chairperson.

Eileen had great experience of chairing Meetings and was very professional in her approach. She could have great fun and was a bit of a prankster but once the meeting began, she was in role and was not afraid to tackle difficult issues within the group. She had been asked to do a job and she took it to heart. Her main vision was to build up the Associate groups and spread the Charism. She expected outcomes to be reached at each meeting and those attending to take on certain jobs. She herself was not afraid of work. At times she was a force to be reckoned with!

Letters were sent to the Associates to ask what would be helpful for their growth. I was with Eileen when the replies came flooding in and the two requests were for a magazine and a day of prayer. The first step was to get Information on each group and the Associate Map was created and circulated. Eileen being the professional took on the role of editing the magazine, her first attempt was on her own PC  spending hours putting it together. That was soon stopped as she found a friend in Newcastle who did it professionally for her. She could get quite frustrated when the articles did not come in on time, but the Lord and Catherine always provided.

Associate gatherings were planned and organised and both Sisters and Associates led these. They were great social and prayerful meetings. Many associates would ring Eileen regularly and she knew many by name.

She was thirsty to find out more about Catherine and her influence, so she travelled to the States to an Associate Gathering there. On her return she was bubbling with enthusiasm, especially the talk of the Canonisation of Catherine. On her return she asked Sister Brenda Dolphin if she would Facilitate a day in Birmingham on the Canonisation. It was a wonderful day. A commitment was made that day to spread the Charism of Catherine.

Eileen then came up with the idea of gathering the thoughts of the Associates on what Catherine meant to them. It was like an industry in her house, making up boxes for the groups to return their findings. Then the thought came she would write to the bishops to ask for their reflections on Sisters of Mercy and Associates. To her surprise the replies came back, and two Bishops rang her. All the returns became a large tome and was sent to Brenda in Rome.

After 10 years Eileen stepped down as Chair but remained faithful to her local Associate meetings and annual organised Area gatherings, until the last two years of her life when her health began to deteriorate.

Mercy was at the centre of her life and Catherine was her daily companion. She would talk to her daily.

Eileen’s image of God was depicted in the story of the Prodigal Son, the unconditional love of the Father, (she chose this Gospel for her Requiem) and that is why the Suscipe meant so much to her. Her God of love and tenderness. She said it daily.

Eileen died peacefully on the 13th November and I went to see her a few days before to say my goodbye. We spoke of her life as a Sister, her happy marriage with Eamonn, the learning curve of being a stepmother and her Associate life. I thanked her for her life of Mercy, for being such a good Mercy Companion and friend to me and we said the Suscipe together.

“Each day is a step we make towards eternity, and we shall continue thus to step from day to day until we take the last step, which will bring us into the presence of God.”