Nineteenth century Birmingham was a place of extremes. Great poverty was everywhere evident, while at the same time many illustrious, holy people were leaving their mark on the city. Among these was our own dear mother Catherine who stayed with the newly established community of Saint Mary’s, Handsworth for one month, from 21st August to 20th September 1841. Other eminent figures include, 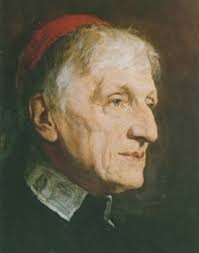 On 14th October of this year, Birmingham rejoiced that it had its own saint, namely John Henry Newman, whose conversion to Catholicism in 1845 caused great controversy. He was much maligned and misunderstood by family and colleagues in a way that was similar to how Catherine McAuley was criticised because of her controversial decision to establish a House of Mercy alongside Dublin’s upper-class residents on Baggot Street.
John Henry founded the first community of Oratorian priests in Birmingham. During his years there, he spent time with both the learned and the illiterate of Birmingham, taught in the school, walked our streets and even entertained his friends at the Plough and Harrow, his local pub.

We know that Saint John Henry visited Saint Mary’s in 1879 after he was created a cardinal, to thank the sisters for the motto painted on vellum for him by Juliana Hardman, and for making his pallium. On that occasion, he celebrated Mass at the altar, which is now in Catherine’s Oratory but was then in the main chapel.
Five copies of letters written by John Henry to the community are preserved in the archives, including one in which he enclosed a donation of £4 for the benefit of the Poor School.

Catherine and John Henry did not meet, but it is easy to see how much they had in common. Both had a deep love for the poor; both valued the role of education in raising the poor from
their destitution. Above all, both had a deep and abiding trust in the Providence and guidance of God.
John Henry wrote his hymn: “Lead Kindly Light” in 1833 following a life-threatening illness. The sentiments must have helped him during the great upheaval of his conversion:

"Keep thou my feet; I do not ask to see The distant scene; one step enough for me." "I loved to choose and see my path; but now, Lead thou me on!" 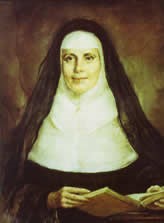 As Newman, so Catherine wrote her Suspice in 1837, following the deaths of five sisters, and when she was suffering as a result of human separations and serious clerical disputes:
“Grant, O most merciful Redeemer that whatever Thou dost ordain or permit may always be acceptable to me………”
She must have repeated this prayer many times in her remaining years; it is her legacy to us and is sung by the Mercy family throughout the world.
In the weeks before her death, Catherine protected the sisters from the full extent of her illness with playful references such as “I have a real old man’s cough”. She had to learn a new lesson – how to be dependent of others for all her needs.
On the evening of her death, she left us some of her most precious words: “Will you tell the sisters to get a good cup of tea when I am gone….” Catherine died in the evening of 11th November 1841.

We thank God for the lives of these wonderful people and pray that they have met merrily in heaven.