In other words, he seems to be saying, I can die now “for my eyes have seen thy salvation.” We can surmise that this child, of an obviously poor family, was left to the ministrations of the elderly priest who was probably deemed to be too frail to be of much use in the business of the Temple, but it was the seemingly worthless old people, Simeon and Anna, who recognise the Messiah and Saviour in the Child. 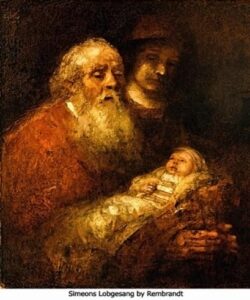 In this painting, the sightless Simeon gazes inward to an inner vision. At last he is comforted; he can die now because the Saviour has come. Anna, too, is gazing inwards. On both faces there is peace but in Simeon’s case there is also pain as he speaks of the conflict this Child will bring and of the sword that will pierce Mary’s heart. (Lk. 2:35).
The light shines on the Baby and on Simeon; Anna in the shadows adds to the feeling of mystery.
Our eyes then turn to Simeon’s hands. They are praying hands, but also the arthritic hands of an elderly and apparently useless person. We see similar hands in many of our own elderly.

There is an atmosphere of sacred solemnity in the whole painting. This pivotal moment in the history of the revelation of Christ is captured by Rembrandt in all its depth and ineffable wonder.

The Suscipe can be called Catherine’s Nunc Dimittis. She began to write it in 1837, a year which seems to have been for her an ‘Annus horribilis’. Catherine gave no title to this prayer, but Mary Clare Moore called it her ‘Act of Resignation’. During 1837 Catherine travelled extensively. She suffered many human separations, including the deaths of five of her sisters, she was beset by clerical disputes, and in addition she broke her arm which was splinted by wooden boards so that she had difficulty in even dressing herself. And yet she could write: “Let nothing delight me but the hope of coming to the possession of Thee, my God, in Thine own everlasting Kingdom.”
Surely this self-emptying is reminiscent of Simeon’s self-emptying?

At the Presentation, Jesus ‘emptied himself’ by submitting to the decrees of the Law; 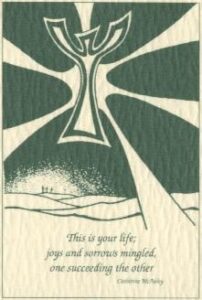 Similarly, Simeon speaks of his readiness to let go of life;

And finally, Catherine can pray that whatever the Lord permits will always be acceptable to her. Thus our Foundress can be placed in a wonderful tradition of leaving everything in the hands of the Lord.

From her place in Heaven we ask that she be with us in these uncertain times, and that she obtain for us the glace to allow God to take from our hearts all painful anxiety.